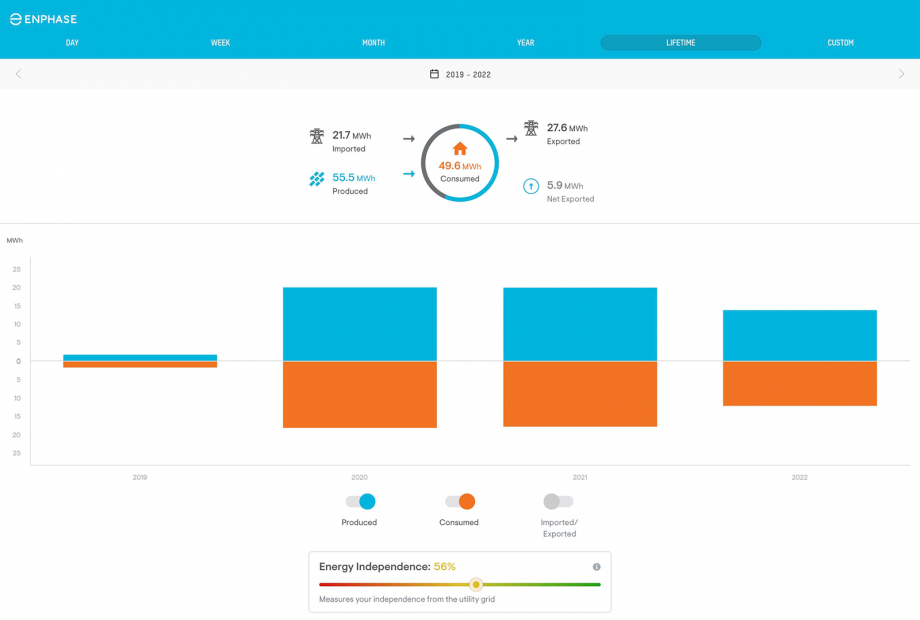 We love Enphase around here, but sometimes they really don’t think things through and cause solar contractors a lot of unnecessary grief. You would not believe how many calls/emails/texts we get about the “Energy Independence” figure shown in the Enphase Enlighten app.

An average person might think this figure indicates how much of your energy is being produced by solar power. That is not the case at all. Take, for example, this client’s system below. For the lifetime of the system, it has produced 55.5 megawatt-hours of electricity and the home has consumed 49.6 megawatt-hours. So on balance, the client is a net exporter of power, and therefore he is producing over 100% of his electricity usage. So why does the “Energy Independence” figure show only 56%? 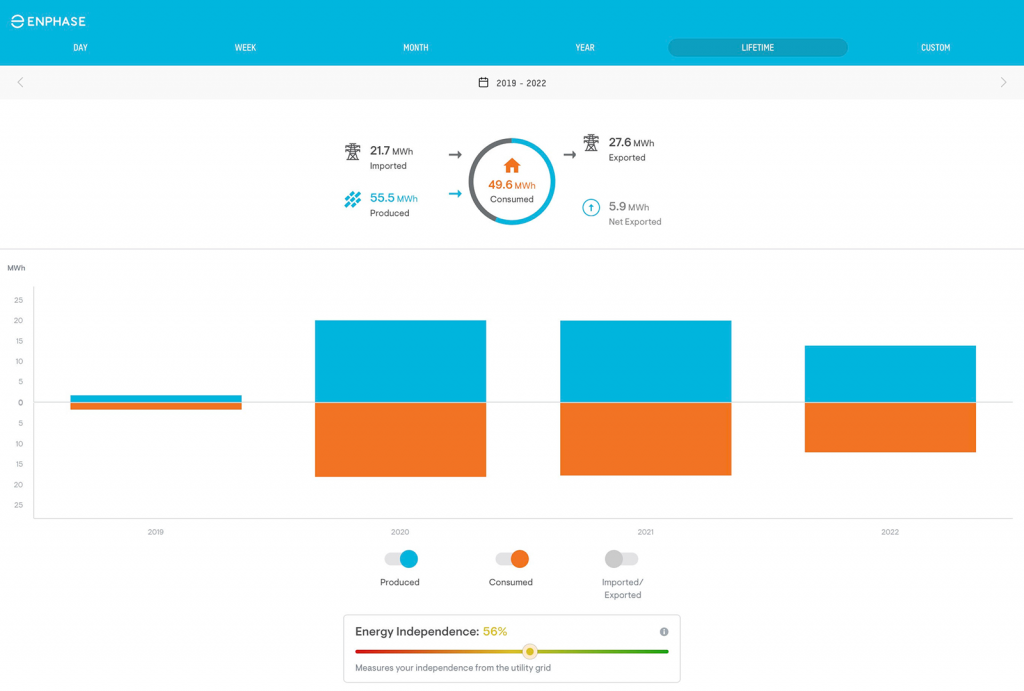 The Enphase Energy Independence Figure Is Mostly Meaningless and Does Not Mean What Most People Think It Does.

What is Energy Independence?

When we connect solar energy systems to the utility grid in a grid-interactive system, electricity comes from two places. The grid provides energy at night and when you don’t have enough solar power being produced. When you have excess power it is sent to the grid. So in essence, you are dependent on the grid for some of your electricity, even if you are producing more than you need over time.

Energy independence, in Enphase’s definition means that you were producing enough to meet your needs for X percent of the time essentially. At other times, you needed the grid to provide at least some power. They call it a measure of self-sufficiency. It is calculated as:

This is really a meaningless figure in terms of net metering, and has no bearing on what you can expect your electric bill to be. Moreover, it also ignores the “dependence” you have on the grid for the excess you send them for future credit. In essence, this client is even more dependent on the grid than the 44% the figure suggests. The grid is quite critical in a grid-interactive solar energy system.

Why Does Enphase Show Us a Meaningless Energy Independence Figure?

That’s easy – to sell more batteries! The only way to become truly grid independent would be to buy enough batteries so you can turn off the grid and just use stored solar power at night and in cloudy weather. So I suppose it’s not a totally meaningless figure, but it’s not particularly helpful. You could use it to estimate how much battery capacity you might need, but using averages for battery capacity determination is a poor approach.

Since Enphase introduced their Encharge battery and Ensemble backup system, they want their existing PV system owners to consider adding batteries, naturally. But batteries don’t make you grid independent, per se. In Florida, we have full net metering, so there is no incentive to install batteries to discharge them daily and to disconnect from the grid. In fact, cycling the batteries will reduce their lifespan. In other states where they require time of use metering, using batteries to become more grid-independent can be beneficial. That’s not how we use batteries here.

Batteries in Florida have only two suitable uses: pure backup power for grid outages or buffering excess power production when your utility or insurer does not allow net metering.

Enphase, Are You Listening?

I am calling on Enphase to eliminate this section from the Enlighten app. Or at least make it optional. Enphase tends to make California-centric decisions that run contrary to the circumstances we have in Florida. This section of the app requires an inordinate amount of our time to explain to system owners, and needlessly concerns them. I also wonder how many are out there that misinterpret the figure and are disappointed in their system performance for no reason.

Again, we love ya’ Enphase, but this one aspect of the otherwise wonderful Enlighten app needs to go!