If you are an FPL customer with solar electric panels, you might be asking how do you read your FPL Netmetering bill? It’s extremely confusing, but once you understand some of the basics of how netmetering works, it all comes together – if you know where to look.

Check out this fuzzy math from our friends at FPL:

Clearly that doesn’t add up. But why? Let’s examine the charges on this bill. 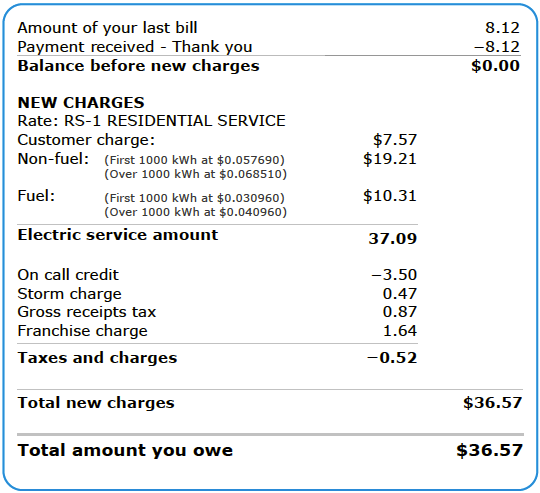 Assuming the 333 kWh number is correct, I was charged correctly for that net amount of electricity consumed from the grid.

So far, so good. But why doesn’t the math add up? To learn why, you need to dig deeper into the “Keep In Mind” section, which sounds like an afterthought, but includes some very important numbers.

Buried deep in this section in the last bullet point is key information about how much energy FPL received from you, and it will help reconcile the fuzzy math shown earlier. First, it’s important that you understand one very critical fact:

FPL has no idea how much energy your solar energy system produced!

How can that be? They say right there that 557 kWh was sent to the grid.

FPL can only meter electricity delivered to your home or received from your home to the grid. What they cannot see is energy your solar energy system produced that was used concurrently in your home. So in fact, I produced much more than 557 kWh during this billing period, but FPL can only see that they received 557 kWh energy in excess of what I needed. You need a solar monitoring system to know your true energy production, but that’s not important for FPL billing, because all we are concerned about is that we are charged correctly for the net amount of energy we use. That’s the amount of electricity they deliver to us minus what we send back to them.

Back to the fuzzy math. FPL also reports in the Keep In Mind section that I had 50 kWh in reserve. This is energy that I “put in the bank” the prior billing period. They added that 50 kWh to the amount of electricity I delivered to them this billing period, 557 kWh, and credited me the total, 607 kWh, against this bill.

If you take the current reading minus the previous reading, the answer is really:

Subtract from that the solar energy I produced this month and banked last month and you get:

Now if you look back at my previous bill, you will see that I was not billed for any energy – just the monthly customer charge and taxes.

The math is still wrong, but if you look down at the Keep In Mind section, it explains things again, albeit in a different location in the first bullet this time, which is frustratingly confusing.

In this billing period I sent 716 kWh to the grid, but I only consumed 666 kWh from the grid, so they put 50 kWh in the bank for me. This increased my reserve and my balance at that time was 50 kWh, which I used the subsequent month as we saw above.

I don’t know why they made the bill so hard to understand. I can only assume that they did not want to modify their billing platform to make it easier to understand. Maybe it would have been a large expense, or maybe they just want to bury the information so it doesn’t look very beneficial to solar energy producers. In any case, the simple solution would be to add lines to the Meter Summary section to make things very clear. For example, on the two bills above, the Meter Summary sections could have looked like this:

Maybe someone has a better idea, but this is much more clear to me, and it puts all of the pertinent meter reading data in one section. It is easily reconcilable in table format.

FPL’s net metering bill is too hard to understand, and if you have been wondering how to read your bill when you have solar panels, I hope this has explained things.