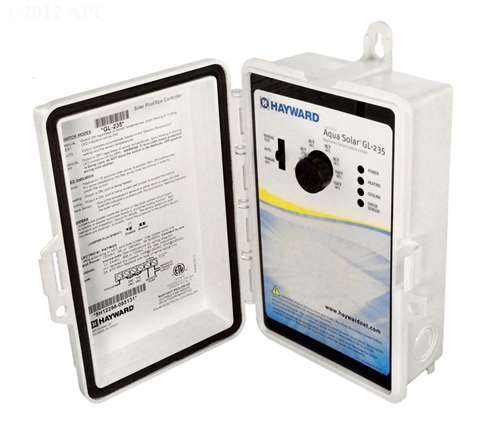 We service all brands of solar pool heating panel. The stories range from sad to funny and everything in between. While most service calls are routine issues resolved, some are not so simple. And others are incredibly simple.

We’ve decided to share some of our stories as we come across them, and this is Episode 1. We’re calling this one “Uncontrolled Solar.”

Most solar pool heaters are installed with some kind of electronic control system. The plumbing can be controlled with either an existing pool automation system or a single purpose solar controller. Some systems have manual control valves only. A solar controller increases system performance and adds convenience.

We got a call from a prospective client that was considering a heat pump to supplement the solar panels on his relatively new home. It was a historically warm December and his pool was only 75ºF. Unheated pools in the area were hovering just under that temperature. Our first inclination was to help him figure out why his solar panels were not working well. Without knowing much more in terms of what he had, we offered to come out and evaluate things at no charge.

What we found was both funny and sad. We had to laugh, but bite our tongue because the homeowner had clearly chosen the wrong contractor.

The Other Guy Did It 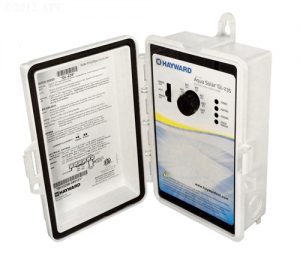 Earlier this summer the new homeowner noticed the pool was getting too warm. He wanted to know if there was a way to stop the solar from heating the pool automatically. He asked his pool service company, and they offered to install a Hayward GL-235, a popular basic solar controller. It is reasonably priced, so the homeowner agree. So they installed it – wrong – in just about every way.

This is where it gets funny.

A solar controller works by comparing the pool temperature to the temperature on the roof. That’s how the controller knows if there is enough solar energy to open a valve and send pool water to the roof for heating. You need two sensors – one in the plumbing near the pool pump and one strategically located on the roof, usually near the solar panels.

This contractor had installed one sensor in the water line that returns hot water from the solar panels. The other sensor was just left dangling outside the controller in free air. The result? The controller would never turn on because it never sensed the roof warmer than the pool water!

But then it gets sad, frustrating, and angering. Instead of using the conveniently placed knock-out on the bottom of the unit, they ran the sensor wires out of a hole they drilled in the side of the enclosure. Then they just ran some flex conduit from the existing timer to the new controller with no watertight fittings on the ends. This is a sure way to allow water to get into the controller!

On top of wrong it was just plain shoddy workmanship.

For the remainder of the summer the pool didn’t get too hot. Of course, this was because the solar pool heater never turned on! But thinking the pool service company had successfully solved his problem, there was only one person to call when the homeowner’s pool pump died. He called his pool service company again.

The pool service company rightfully sold the homeowner on the efficiency of new variable speed pumps. He agreed to have one installed immediately.

You can probably imagine where this is going…

Mistake #1: While the pump installed was an excellent variable speed pump, the Pentair Intelliflo, it is not compatible with the controller they had installed previously. When using a variable speed pump you need to make sure the solar controller can override the scheduled speed when the solar is aactive to get enough flow through the panels. Otherwise you either don’t get enough performance out of the solar panels or you waste money by running the pump at an unnecessarily high speed. The pump and controller were not designed nor installed to “talk” to each other.

Mistake #2: The program times and speeds were all wrong. It was set to run at a high speed for two hours in the morning and then revert to a low speed in the afternoon. Had the controller been installed right, the pump should have at least been programmed to operate at the higher speed during the typical solar window where heating would best occur. Consequently, very little water could be pushed through the solar panels at the required time.

And there were other problems like the priming speed being set way too high for the older pool plumbing.

What We Would Have Done

We know solar. That’s not to say that some pool builders and pool service companies don’t. But they tend to focus more on whole pool automation products, not solar specific controllers. Whole pool controllers and pool/spa controllers almost all control solar panels and have compatible variable speed pumps. If you go with a full-fledged pool controller, you really can’t go wrong. We do have our favorites, but that’s for another day.

Single speed pumps are going the way of the dodo. They are inefficient, loud, and often don’t meet new building codes. That means we need to plan everything for the future. And when you have solar panels, that means you have to consider the pump and controller combination, even if being installed separately.

We no longer recommend the GL-235 because it has very limited capability when it comes to controlling variable speed pumps. Sure, it can change the speed on a Hayward Ecostar pump, but it also defeats the scheduling/timing capabilities of that pump’s electronics, requiring an external time clock. This becomes very limiting.

For a basic solar controller, we recommend the Pentair SolarTouch. In this situation it makes excellent sense. It’s also a digital control interface and costs about the same as the GL-235 with analog interface. The homeowner had an old single speed pump that would eventually be upgraded to a variable speed model. The SolarTouch can easily integrate with a Pentair Intelliflo VS pump, controlling a solar speed, and not disabling the onboard functionality of the pump electronics. The Intelliflo even comes boxed with the required communication cable. The SolarTouch can control a speed on a Hayward Ecostar the same way a GL-235 can with limited functionality.

In other words, the SolarTouch has everything the GL-235 has and more for the same price essentially.

The homeowner really has only one choice if they don’t want and uncontrolled solar pool heater (a manual system). They will need for us to install proper sensors, and then run the pump at the prescribed solar speed during the estimated times solar can be effective. It’s not ideal, but it’s the best we can do using the existing equipment.

It was a bit of an expensive lesson, and one that could have been avoided by hiring someone that truly understands how solar pool heating panels work with controllers and pumps.

This homeowner got taken by someone who said, and probably thought they knew what they were doing. Sadly, this is all too common in the industry.