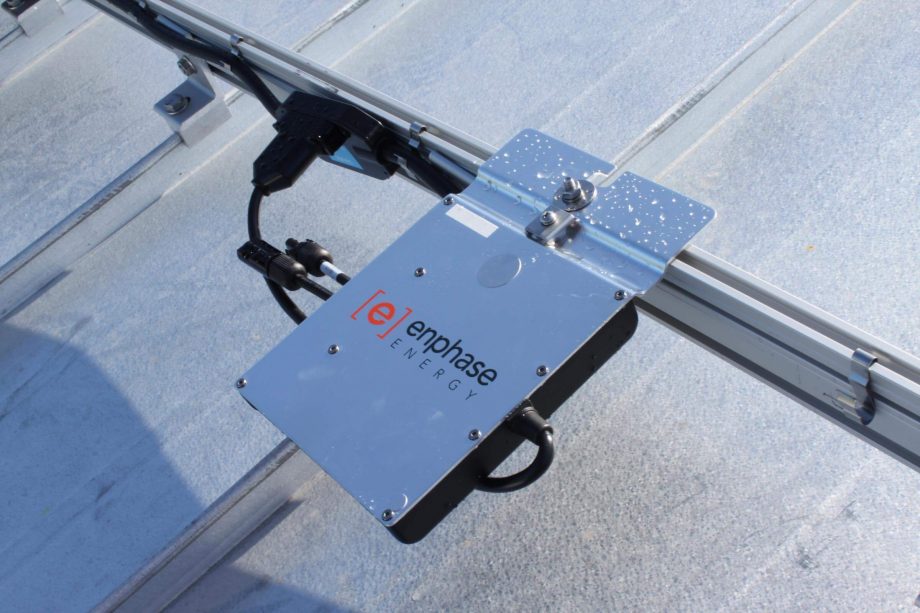 Inverters In The Good Ole’ Days

Inverters convert DC power to AC power that syncs with your utility electricity in your home or business. Years ago there was typically one large inverter that converted power from solar panels that were strung together. They are commonly known as string inverters or central inverters. These devices had spotty reliability. Some brands were better than others and some product lines had major issues. Either way, they were never designed to last the life of a solar energy system. Replacement of the inverter was often factored into the investment analysis.

Replacement of this component could be simple or could be very difficult. If a direct replacement was not available, some rework was often needed. The units were heavy. Poor installation practices might require installers to get on the roof to disable solar panels before replacement. And maybe most importantly, electric code changes made replacements problematic in some cases.

The New Breed of Inverters 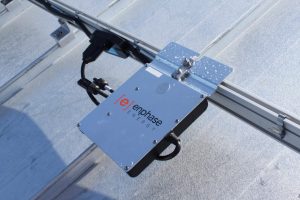 A previous generation microinverter mounted on a solar rail. A solar panel will be installed over top of this microinverter.

In the late 2000s, microinverters come onto the scene in a real, commercially viable way. This technology paired a single solar panel with a single small inverter – a microinverter. There are clear advantages to this system architecture and a few disadvantages.

Microinverters are safer than DC string inverters because there is no high voltage DC power coming from the roof to the inverter. They are highly resilient to shade because each panel operates at its maximum capability while connected to its own inverter. There is no large, heavy box to mount on the wall. Panel-level monitoring was revolutionary. And the number one selling point was that there is no single point of failure in the system. In other words, if one or two microinverters failed, the rest would continue to produce power.

The arguments against microinverters are typically cost and serviceability. Microinverters are definitely more expensive, but not by much when you consider the extra energy harvest and other reliability factors. Opponents don’t like the fact that you have to get on the roof to replace faulty microinverters. And since there are a lot of them, the chance of faults increases.

The early opponents had a lot of reasons to consider themselves correct. Failures of early generation microinverters were common. Fortunately, warranty replacements were pretty forthcoming, and like planned, these system owners were not completely without power production. Solar installers who stuck with the technology in hopes of improvements were rewarded. We are many generations of models into the microinverter technology, and the latest generations have a remarkable reliability record.

The sales pitch for DC Optimizers is good. They fall in between string inverters and microinverters in terms of price. They have similar shade resilience and panel-level optimization. They also have panel-level monitoring (although DC only, no AC output monitoring). At first, DC optimizers seem like a good tradeoff between the other options.

There are clear downsides to the DC Optimizer system architecture. These systems still have high voltage DC wiring coming through the attic down the a string inverter. Voltages are typically around 400V and arguably pose a greater risk of fire and injury. These systems still reduce voltage to safe levels when turned off at the ground level, but while operating the high voltage DC power issue does exist.

The other downside is having the worst of both worlds in terms of potential points of failure. Now you have to consider the reliability of the power optimizers, which are paired with one per panel, and a string inverter. If the string inverter fails, the whole system stops production. And if power optimizers fail, you still need to replace a MLPE component on the roof.

In essence, a DC Optimizer system pairs the serviceability concerns of microinverters with the reliability problems and single point of failure represented by an old-school string inverter.

The Debate Rages On

Both sides are often rabidly on one side or the other. Solar contractors often specialize in one technology or the other. And that makes sense. From a training, material stocking, and efficiency standpoint, choosing a side and sticking with it has advantages.

An Anecdotal Reason To Choose Microinverters

Earlier today I headed out to a service call for a system I did not install. I knew it was a DC Optimizer system from the #1 brand out there. Because of the type of fault, the monitoring system would not provide any information on whether I was looking at a string inverter issue or something going on with the MLPE on the roof. That uncertainty makes preparation for service more difficult.

I arrived to find that the system was stuck in a condition that indicated it was nighttime, but it was daytime with full sun. Further investigation revealed that the Optimizers on the roof were producing their expected voltage under the circumstances. The issue turned out to be the string inverter. What this meant is the whole system had not been producing power for weeks. The owner only learned of the fault when he received a very high electricity bill.

Not only that, but the failed component also isn’t something a dealer would keep on the shelf. That means a warranty claim needed to be submitted and a long wait for a replacement part. This client is going to lose over a full month of energy production! The string inverter, a single point of failure in a DC Optimizer system, brings us back to the days when string inverters were the only option. It is a backward step.

With microinverters, we keep some spares in stock for most models, so we can do advance replacement while waiting for warranty parts. However, if we don’t have a replacement available, only that one panel is not producing power. There is no single point of failure that takes down the whole system!

No System Is Bulletproof

We talk about single points of failure and multiple points of failure pretty loosely in the industry. The truth is that all systems have a single point of failure at the point of interconnection. This can be a fuse or circuit breaker, but to be completely accurate and honest, all systems have this risk. Fortunately, it is exceedingly rare and easily corrected when you have the interconnection point fail.

Any system with MLPE will most likely experience some sort of failure in its lifetime. The question is how severe the impact will be and how easy it is to correct it. With one (major) point of failure eliminated, the microinverter solution wins in our opinion.

Concluding Thoughts on the DC Optimizer vs. Microinverter Debate

Proponents of DC Optimizers often use the argument that microinverter proponents just sell them to make more money. That is not the case at all. Microinverters do cost slightly more at this time, which represents the advantages they have. Most solar contractors, including us, make the exact same amount of money on the two technologies. We charge our cost difference when offering alternatives. In fact, we could make more money selling DC Optimizers, but we don’t feel it is in our clients’ best interest.

We have chosen to microinverter route, having sold the industry-leading brand for over a decade now. Our experience with the technology, design, installation, service, and customer satisfaction with microinverters proves that we headed down the right road early on.

If your dealer pushes DC Optimizers, there is going to be a reason for that. Often it comes down to price competitiveness. Some long-time solar dealers refuse to accept the premise of module-level DC to AC conversion altogether. But those of us who have made the switch to this modern system architecture are being rewarded. Client satisfaction does not lie. Dealer success is a good indicator. And a solar contractor’s reputation is the ultimate reflection of well-made decisions.