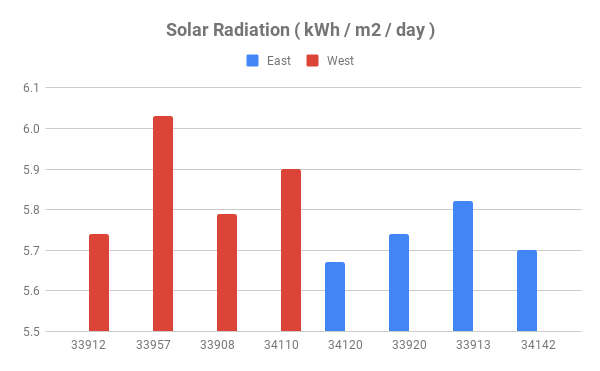 Over the last several days I have heard on the radio and TV that inland rain will affect Southwest Florida. Over the last 35 years living here, I have always noticed that afternoon rain comes earlier in the day further inland. Areas east of I-75 seem to get rain earlier and more often.

That got me thinking – is solar electricity production better near the coast?

I spent a few years of my childhood on Sanibel Island. My friends would always joke that our parents paid higher property taxes to keep the rain away. It just seemed like we would always have more play time in the afternoon before the rain arrived. That’s not to say coastal areas don’t get a lot of rain. It’s just my perception that the clouds and rain come later in the day, and it’s probably true. Naturally, that would allow solar panels to produce more energy while the peak daylight sunshine is available.

Looking at the Numbers

I did a quick study to see if my suspicions were correct. My methods were far from scientific, but the data definitely showed a small difference. Using the National Renewable Energy Labs PVWATTS solar modeling program, I picked out eight zip codes in Southwest Florida. Four are east of I-75 and four are west. The computer model uses historical weather data to predict solar energy performance for an average weather year in any given geographic area of the US. Here are the results:

On average, the selected zip codes west of I-75 outperform the eastern zip codes by about 2.7% annually. On one hand, that’s not very much. But every bit counts when you are trying to squeeze out as much energy as possible. It’s certainly not going to be a deciding factor whether to go forward with an investment, but it’s interesting nonetheless. The way I look at it is that it sweetens the deal for people living west of I-75.

Using microclimate data is important because small geographic climate difference can cause significantly different weather. To my knowledge, this is more pronounced in areas that have more drastic weather swings in small areas, like the windward versus the leeward side of a hill or mountain.

Maybe the higher taxes on Sanibel really do keep the rain away. The 33957 zip code topped the performance figures in my study. It beats the average of the other seven zip codes by 4%! It’s not surprising, given that it’s the westernmost zip code with a healthy sea breeze to keep rain onshore in the afternoons.

Conclusions On The East-West Divide

These figures are all in a pretty tight range, so the conclusion should be taken with a grain of salt. But it’s all very interesting to explore. There are other factors that PVWATTS doesn’t consider, or at least I didn’t enter as parameters. For example, presumably more rain, or earlier rain, would wash off panels. Perhaps this would increase energy output once the sun comes back out. That’s really hard to determine. Either way, we are kinda’ splitting hairs here.

Note: The assumptions for the computer model were made consistent, using a south roof, standard pitch, and all other factors the same with the exception of weather data.