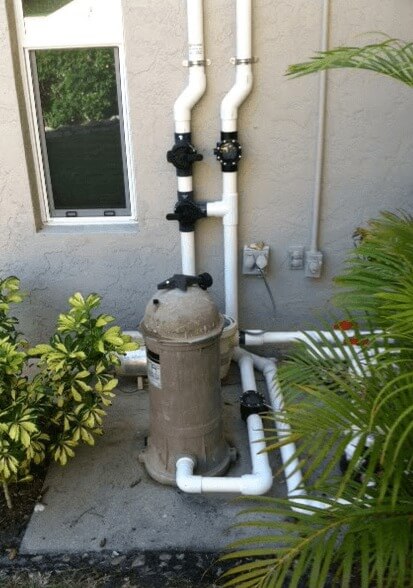 When there is air in the filter basket of a swimming pool pump, it often gets blamed on the solar pool heater, but that’s impossible because the solar pool heater comes after the pool pump and any air in the pump housing would have to come from the suction side of the pump. Usually a suction leak occurs at the gasket for the pump filter basket lid or a union or fitting near the pump.

Recently I was at a home that was about to get a solar pool heater installed, and I observed a suction leak as seen in the video below. This is a cause for concern for a few reasons, but for solar pool heating the main concern is that the pump will not be as effective making water flow through the panels, reducing the heating performance. 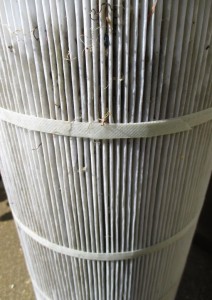 Sand and Gravel in Filter

My concern in this case reached new levels when I could not quickly determine the source of the suction leak. I took a look at the filter cartridge, and my suspicions were confirmed. The pool had an underground or at ground level suction leak. This was obvious because the filter was packed with sand and small gravel particles. These had to come from somewhere, and the homeowner reported the cartridge being quite new. The pump had been recently replaced, and I hypothesizes that old glue in a coupling right at ground level may have shaken loose during the pump replacement. However, I couldn’t rule out a broken pipe or fitting underground, which is never fun to tell a pool owner.

Sure enough, the company that replaced the pump discovered the source of the suction leak at the coupling. It was an easy fix to glue on a new one and replace the cartridge, which the company gracefully and generously did at no charge.

When suction leaks occur and debris is pulled into the system, there is always a danger of larger particles clogging up solar panels. While the filter should do it’s job, there is always a chance that some debris can slip by. That’s why it is so important to identify and correct suction leaks when they are detected, and don’t operate your solar pool heater if you suspect a leak.

In the end, we installed the new solar pool heating system. The new valve manifold is pictured below. With the suction leak fixed, this system will perform great for many years.