In a now-famous video among solar energy industry colleagues, the Chairman of the Florida Public Service Commission suggested the The Sunshine State is just a license plate slogan. Solar energy opponents have included Florida’s often cloudy weather in talking points that express doubt about the viability of solar energy in Florida. In fact, Florida Power & Light’s parent company, NextERA Energy, just announced a huge utility scale project in Minnesota, while at the same time feeding talking points to legislators citing poor weather in Florida as a reason to block solar energy initiatives. Have you ever been to Minnesota?

While Florida does have lots of cloudy weather, particularly on summer afternoons, there is obviously ample sun to make solar energy viable here. But what does happen when it get cloudy? Do solar panels still produce energy? Will you run out of electricity?

Most solar electric systems in Florida are grid-interactive systems. That means the solar panels work with the utility grid to seamless deliver energy to your home. In the event that you are over-producing electricity with solar, the excess is fed back to the utility grid (and you get credit for later use). When you are not producing enough power for your home, like at night or during cloudy weather, the utility grid makes up the difference and delivers the needed extra power to you seamlessly. You will have no idea whether you are consuming solar or utility sourced power. All of this works via a system called Net Metering, which means you are only billed for the net amount of power delivered from the utility company each month.

From the homeowner’s perspective, all that matters is how much energy is delivered from the solar energy system (power over time). Clouds passing by will reduce the instantaneous power delivered by your solar panels, but on average you will produce a fairly predictable amount of energy over longer periods like months and years. Residential homeowners are only billed for net energy use, and the instantaneous power draw has no bearing on your bill.

From the utility company’s perspective, it’s important to predict how much power needs to be delivered at any given time throughout the distribution network. In that respect, utility companies have a difficult job, and have understandable concerns about solar power. However, it has been shown that at low penetration rates, the impact is manageable. It is important to note, however, that utility companies are still responsible for building capacity and being able to deliver enough power to meet your typical demand, even without solar power supplanting your usage.

This is the conundrum in which we find ourselves. You, the homeowner, are billed for energy use, and utility companies make money by delivering energy. However, the utility company needs to build infrastructure to deliver instantaneous power — but they don’t bill you for power, they bill you for energy (power over time), which is partially supplanted by solar energy systems.

It’s the job of power companies and regulators to figure this out, and the job of the Public Service Commission to act in the best interest of rate payers when developing rules. What you need to know as a homeowner is that clouds may reduce the amount of power produced by solar energy at any given moment, but in the long run there is plenty of sun in the Sunshine State to produce ample energy.

Below is a graph of my home’s solar energy system output over the last week. You can almost tell the weather by the power output. Yesterday was particularly cloudy, as was January 9th off and on. Incidentally, you can see my utility consumption below spiked on the 9th and 12th, the days with cloudy weather. Of course, other factors were involved, like how much energy I actually consumed in total.

My solar energy production in the last week. 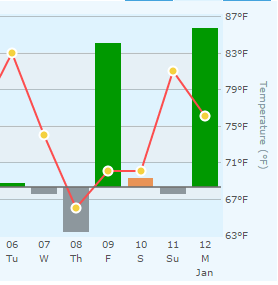 My utility electric usage spiked on cloudy days (in green). However, it will all balance out over time.