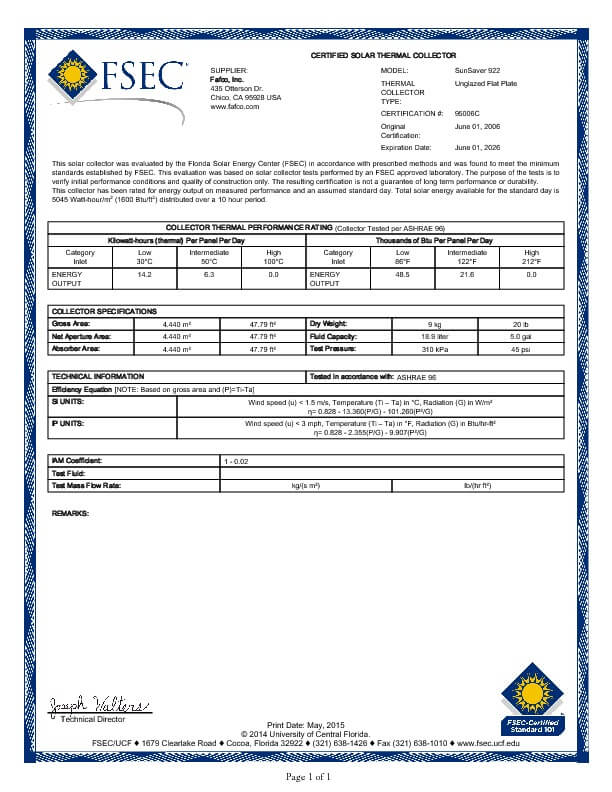 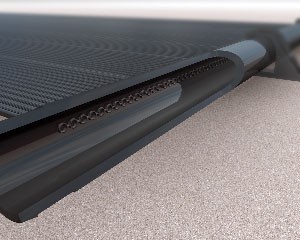 There is more to solar panel performance than just ratings. The panel design will determine the actual flow rate and performance during adverse conditions not considered with standardized ratings.

The best represented solar pool heating panels in Southwest Florida are iSwim™, FAFCO Sunsaver™, Heliocol™, and Solar Industries (Aquatherm). The de facto rating agency in Florida is the Florida Solar Energy Center. They publish solar thermal collector ratings that list a solar pool heating panel’s output in thousands of BTU per square foot of panel per day. In this article we compare the four manufacturer’s panel ratings to help you make an informed decision, and decipher what the ratings really mean. You might be surprised to learn that the ratings have some important caveats that you need to take into consideration.

Here are the ratings broken down by category for each manufacturer’s solar panel (but keep reading below to learn why the ratings are not very useful):

In reality, you are not going to heat your pool to anywhere near 122ºF. That would be extraordinarily dangerous. The point is to show that the panels lose efficiency as the water temperature rises relative to the solar panel temperature.

At first glance, you might think the FAFCO™ panel is the ratings winner. However, there are many more comparative factors when selecting a solar pool heater. For example, the collector type will indicate what kind of performance to expect in conditions that standardized tests do not consider. Rarely do solar panels operate under standard conditions. The weather and solar radiation varies throughout the day and the year. Standard test conditions also limit wind speeds, so the cooling effect for different panel types is not tested.

There are two major flaws in the ratings system: water flow rate and time of year.

The most important factor when considering solar pool heater comparative performance is flow rate. The ratings use a standardized flow rate determined by manufacturers’ recommended rate of flow for the most efficient performance. The problem is that flow rate depends on the amount of restriction caused be the panel and plumbing. While FAFCO™ has the best rating by a slim margin at a standardized flow rate, they also have the highest amount of restriction in the panels by a wide margin due to the panel design. That means the flow rate in real world conditions is lower, reducing panel performance. For a given pool pump or pump speed, the iSwim panel will have the highest flow rate, improving performance. The Heliocol panel features a low resistance over-molded design also, but they use a 1-1/2″ header, plumbing, and valves, negating their system level advantage.

If the ratings were standardized against a given pump horsepower and typical pool plumbing pressures, the iSwim™ panel would crush the FAFCO™ panel and all others.

Ratings are annualized, meaning they show the average solar collector rating over the period of a typical weather year. However, most people in Southwest Florida do not heat their pool year-round, turning off their heaters in summer. Some panels (Heliocol™ and FAFCO’s Separated Tube model) gain an advantage during the summer months where the loose tubes absorb ambient heat, skewing their summer performance ratings higher. In reality, most people need to heat their pool during challenging weather conditions during fall and spring when ambient temperatures are cooler and it is typically windier. In these conditions, full body solar panel designs like the iSwim panel shine and loose/separated tube designs perform relatively poorly.

If the ratings were standardized to take into account when people actually heat and use their pools, iSwim and other full body panels would be rated much higher relative to loose tube models.

The truth is that all of the major solar panel brands are rated in a tight band. The ratings producer FSEC says in their ratings explanation that collectors rated within 25 BTU/sf should be considered a negligible difference. What is not so clear are the caveats that result in higher performance when it matters most when using collectors with the ideal design and flow characteristics like iSwim.

While selecting a solar pool heating panel involves much more than simply looking at which one performs the best, the FSEC ratings are a good indicator of relative heating performance for each brand, and show that all panels fall into a pretty tight range of performance. The four FSEC ratings are available below for your independent review.