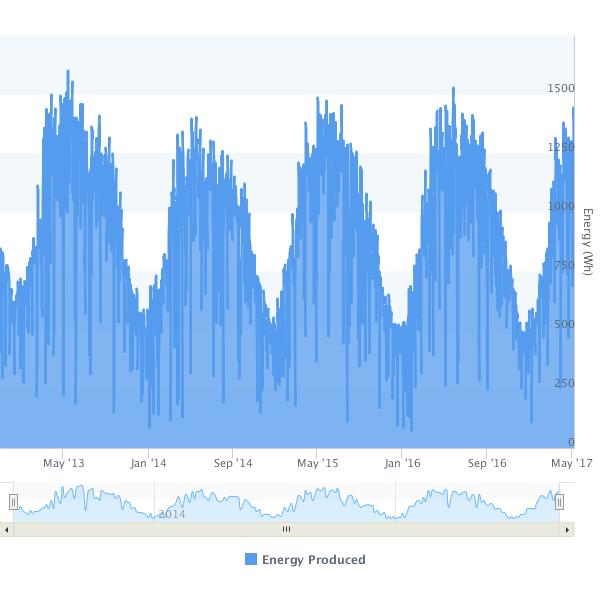 There are many factors that go into solar panel energy production. The orientation, meaning the compass direction toward which they tilt, is one of the important factors. But you might be surprised at how little impact it really has.

Here in Southwest Florida, we are pretty far south, so at mid-day on the longest day of the year, the sun is virtually straight overhead at noon. On the shortest day of the year, the sun rises to a maximum of about 45 degrees above the horizon. As a result the best tilt angle is somewhere in between zero and 45 degrees. But we’re talking about orientation here, not tilt.

Of course tilt does matter when it comes to solar electricity output. Think about it this way – if solar panels are flat, there is no such thing as orientation. Flat is flat. As the tilt angle increases, the orientation has an increasing importance.

The impact of orientation and tilt are related.

The vast majority of roofs in Florida are shallower than 8 in 12 pitch, or 33.7º from flat. Even at this relatively steep roof pitch, the difference between a south versus an east or west roof is only about 10% energy production. That surprises most people. The conventional wisdom is that a south orientation is absolutely critical.

We have lots of real world data to back this up now. With the advent of microinverters, we now have data from many individual sites where there are solar panels with multiple orientations. One of my favorite sites to watch has panels on three roofs – south, west, and east. It’s also a two story house so there is essentially no shading on the roof from even distant trees or structures.

The residence has had solar panels for almost five years now. What we see at this house is exactly what we would expect. The east and west roofs are within 1% of each other, and both are about 10% less efficient than the south roof.

Here are graphs showing daily energy output on each roof. 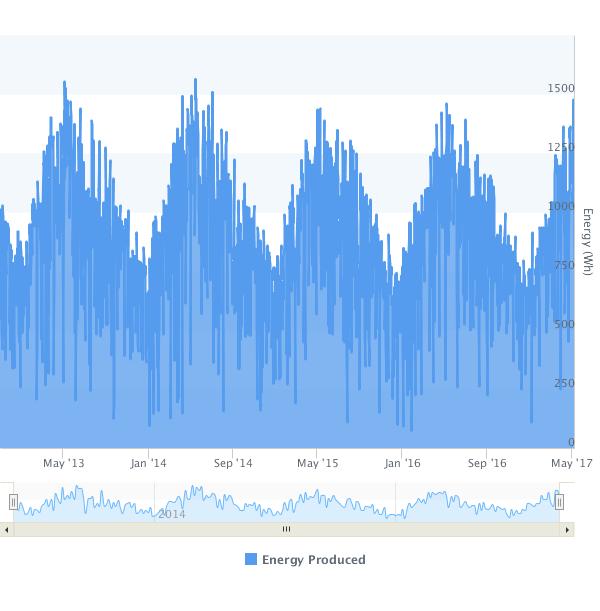 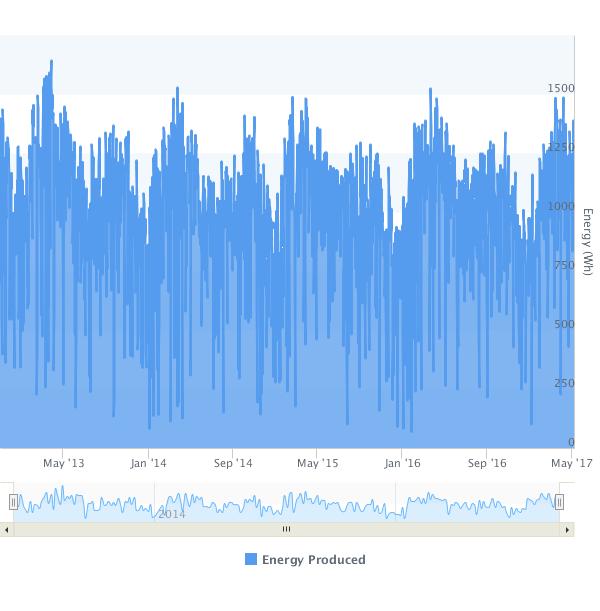 Most household solar energy systems today in Florida are grid-interactive. That means they work in parallel with the utility grid with no batteries. All that really matters is how much energy is produced on an annual basis. You only pay for the electricity you use under a billing system called Net Metering.

So in essence, you shouldn’t care when power is produced – only how much energy you produce in total.

What’s important is very different for off-grid, battery based systems. In off-grid systems, you need to make sure that energy production is sufficient to recharge batteries and power all of the appliances in the house. The time at which solar energy is produced and stored is important, if not critical, in off-grid systems. Design of these systems is far more complex.

If you look closely, you will see that at times of year, east and west roofs actually perform better than south roofs. Overall, south is definitely better in terms of total annual energy output. There is less variability in energy production throughout the year, accounting for the increased total output for south roofs.

East and west roofs have more variability throughout the seasons of the year. In the shorter months, production suffers. With a shallower roof pitch you would see less dramatic peaks and troughs.

Another interesting fact is that peak daily energy production is about the same for each orientation. It all depends on the time of year and weather. The best day of the year on each roof is very close to each other – in the ballpark of 1,600 watt-hours per panel.

It is completely reasonable to use an east or west roof if you don’t have a good south roof, or don’t want to use a south roof for whatever reason. You will have some degree of reduced energy output, but the difference is not as dramatic as many would think.