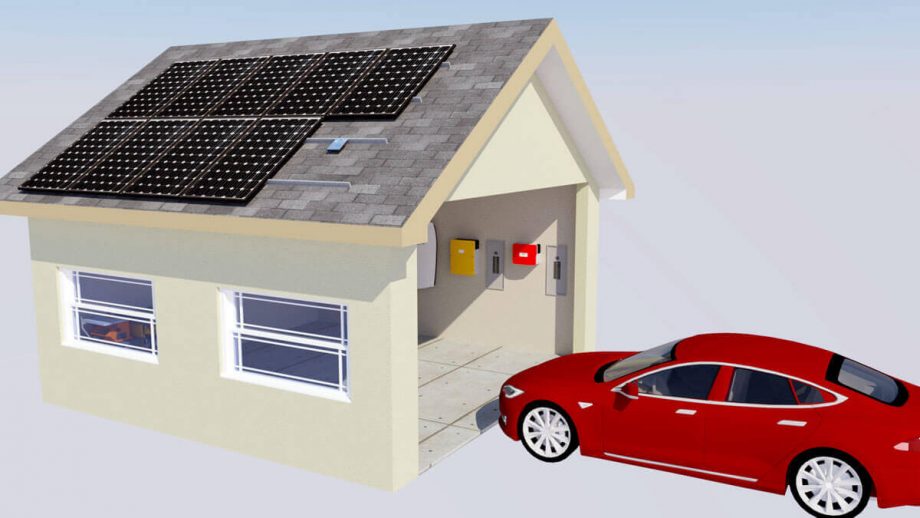 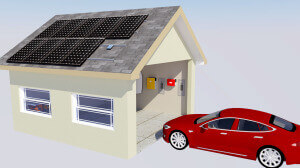 First, let me be clear – unless you’ve already bought one, you are not getting a Tesla Powerwall in the next 18 months. They are simply not available. There are plenty of other battery options out there, but this article focuses on the Powerwall because of the media buzz that has been generated recently. With that said…

In short, there is no answer to “how many solar panels you need to charge a Tesla Powerwall” without knowing the time-frame over which you want to charge it. In fact, you could theoretically charge up a Powerwall battery with a tiny 10 watt solar panel, but it would take almost 6 months!

Let’s get down to some battery basics:

Batteries do not produce energy – they store energy. The rating of a battery is its capacity. The larger Tesla Powerwall battery can store 10 kilowatt-hours (kWh) of energy. That energy can be used in your home, but it requires an inverter, which converts DC electricity to AC electricity. Batteries capacity ratings are dependent on the amount of time over which the energy is used. The assumption in this case is that you will use 10 kWH over a 24 hour period, which means you can use 0.416 kilowatts (kW), or a steady 416 watts for 24 hours before your battery is fully depleted. If you attempt to use electricity faster, the capacity will be less. The maximum rate at which you can use electricity from the Powerwall battery is 2 kW. At that rate, the battery will last under 5 hours.

Solar panels generate electricity that can be stored in the Tesla Powerwall battery. A charge controller is required to regulate the charging rate. You can charge a battery at a variety of rates, and while Tesla has not published the maximum charging rate, we can assume it is the same 2kW as the output rating. That would equate to about 8 solar panels at 280W each (adjusting for system losses). In Florida, 8 panels rated at 280W each would produce about 11 kWh of energy per average day, but since there are losses involved in battery charging, realistically you would probably be able to store about 7 – 8 kWh of that energy generated. If your battery is 70-80% depleted, you could realistically charge it up fully on an average day with 8 solar panels.

Now that is an “average” day. Since solar energy is weather and time-of-year dependent, some days will be better, and some will be worse. If you install a large number of panels, you may be able to charge up your 7 kWh Powerwall in under 4 hours. If you install a small number of panels you could charge up your Powerwall over a period of multiple days. If you’re looking for panels that will charge a fully depleted Powerwall battery on an “average” day, about 10 panels rated at 280W would be a good estimation.

In reality, your Tesla Powerwall battery would most likely be part of a grid-interactive solar energy system, and the battery would charge from the utility grid and solar panels simultaneously. The relationship between storage capacity and solar energy production is complex, variable, and imprecise. The first step is understanding how energy is used, stored, and delivered. A battery is not a magical perpetual motion machine that solves all of our energy woes. In fact, it is more of a necessary evil to cushion variability in solar energy production, utility power time-of use cost, and utility availability (outages). Determining how many solar panels you need is more a function of how much energy you use (power use over time), not how much energy you can store.